Warnings for heavy rain for Graubünden 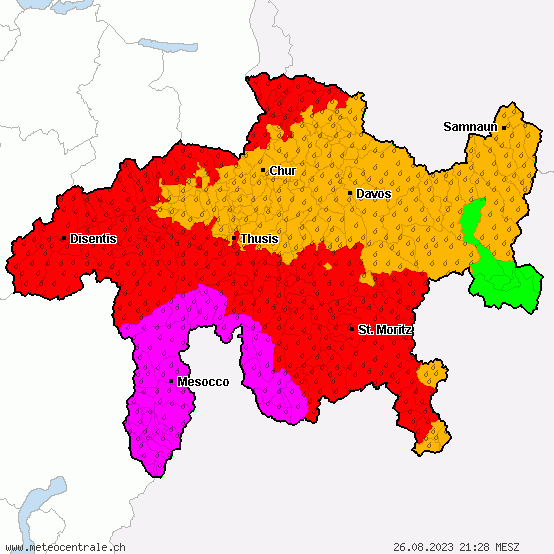 The map gives an overview of all the heavy rain warnings for Graubünden. On the graphic you can see at which locations respecively in which areas of Graubünden heavy rain falls have to be reckoned with. This may entail flood, overflowed streams, rivers and lakes as well as landslides and mudslides in Graubünden.

We distinguish between weather watches and weather warnings. Heavy rain watches for Graubünden are issued if heavy rain falls in Graubünden are probable but there are uncertainties about duration, intensity and/or the course of them. Heavy rain warnings are released if considerable volumes of rain have to be reckoned with within the next 1 to 12 hours. The detailed and reliable forecasts of such heavy rain events are important especially for the agriculture, the traffic, insurances and event organisers, as well as for settlements near rivers of Graubünden. Professional and experienced meteorologists at the Severe Weather Centre continually adjust the heavy rain forecasts manually and make them cutting-edge 24 hours a day.